It´s been a mixed bag here, our new fridge freezer finally arrived, unfortunately the fridge compartment is not as deep as before so having to get used to it. I think it will need a change of ordering habits and mindset, but so nice to have everything chilled again without the long walk.

Rebecca and Theo have been up to stay a couple of times, we pick them up on a Friday afternoon and they stay till Saturday about 6 when Antoni picks them up. I love spending the time with both of them and it gives me the opportunity to play with Theo whilst Rebecca catches up on some much needed sleep. It is also good from his point of view as he doesn´t always need Mummy there the whole time. He loves his time in the kitchen, even if it´s just because Yaya wants a cup of tea and he helps with the tea bag. We have chamomile tea and he has taken quite a liking to it, great in the afternoon to help him unwind.

This week I seem to have a bee in my bonnet, needed to declutter, it´s when you discover boxes in drawers with only a few items in them (mainly model helicopter parts) and the inevitable why are we keeping this. Papers in files dated 2005, really! way passed the 7 years, we have a very old fashioned cylindrical  log burner that came out of the casita years ago, so I´m hoping we can use it to burn the papers rather than shred them.

I moved on wielding the paint brush and roller, I can only do a little at a time, and have to ration out the spoons (energy taken) but the arches in the doll house area have been painted, along with the stair well and one stair wall. Think I shall have to put the larger roller on a long handle to do the tops, no way am I going up a ladder!

We have a little water feature that we brought with us, yes all those years ago, bought from the Brannam pottery in Barnstaple which started n 1848, they were having a closing down sale which was sad, I suppose it must have been 2005. Anyway I wanted to get a solar powered pump just to give a little trickle and to aerate the water to avoid mosquito lave. Didn´t get round to it, but for Christmas Chris bought me one.

He had other plans though, he collected rocks from around the place and built a super pond. It´s built on the tiles in the courtyard with a layer of lining, then sand and another layer with more rocks around the edges. So now I have my water feature, much better than I envisaged and it´s free, when the sun comes out lol 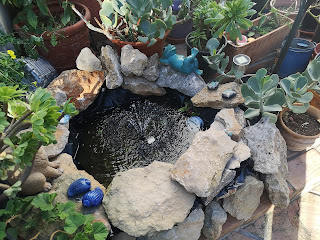 The wonderful thing is it has already been visited by dragonflies and even a few very brave birds have swooped down  oh and the furries thick it´s better than their fresh water bowl.

Picking up stitches for the collar of Theo´s jumper, but not much else in the crafting