We are experiencing higher than normal temperatures here for June at the moment (39c+) and on Friday DD and I  had to return to the hospital to see her consultant.  It was sooo hot, but I didn't care as DD was driving me for the first time this year and it felt so normal it was great.  She was given the all clear to venture out in her car and has been making little journeys and loving it.

These trips always seem to be a marathon what with all the usual waiting time, but the consultation went well,  new TAC scan booked with follow up and slowly slowly recouperation.  The best news was she can now have a full normal diet.  She has been restricted to having all fruit and veg peeled if raw otherwise it had to be cooked.  We have had some fun with some things, got to be a dab hand at peeling strawberries and even had a go at peeling blueberries, but did give up after half a dozen - can't think why?! lol

So to celebrate we went here in Javea 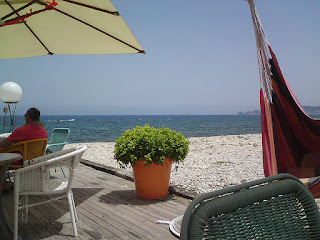 This is about 20 mins away from the hospital, a lovely beach side cafe, literally placed on the stones of the beach which meant we had full advantage of the gentle breeze coming off the sea, most welcome and of course the wonderful view. 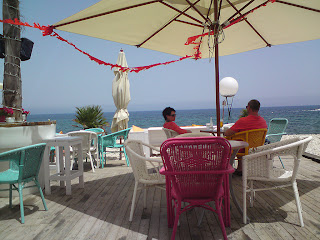 We chose this cafe as we knew they did this, a super mixed salad with goats cheese, walnuts and honey dressing 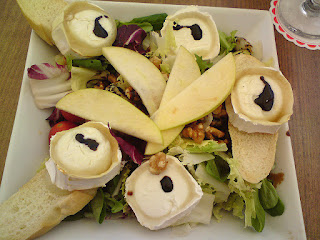 It was wonderful to see the utter delight and enjoyment on DD's face as she tucked into her first proper salad of the year. It was very yummy.  Afterwards we stopped in the supermarket and she selected lovely plums and is looking forward to tucking into cherries.
Just makes you appreciate the small things in life doesn't it.

Found a little project to do so off to find some shade and have a play.
take care
Posted by Chrissie at 11:38 AM 3 comments:

I'm back, well sort of! I've been away on a long journey, not one, I have to say that was planned or that I enjoyed, but one that has taken us as family into uncharted, sometimes terrifying waters, where we have had to learn survival tactics and strategies, but it is one that has highlighted our personal strengths (and weaknesses) and brought a close family unit even closer together.

Just before Christmas my beautiful daughter was suddenly diagnosed with a large inoperable tumour in her chest cavity.  Bad enough, but then the biopsy revealed she had Cancer and if treatment did not start immediately she had very little time left. As I am sure anyone who has been touched by cancer would agree, it impacts on everyone and everything.

We started the new year learning to live with 24/7 shifts in the hospital and the first round of aggressive chemotherapy, having moved only a few weeks earlier into their own home, DD and her fiance had to move back with us for her constant care.  Chemo in itself would warrant a chapter but suffice to say it was every week for 12 weeks solid beginning with leaving home around 6am and returning after 11pm with a 3 hour round trip.  Some weeks the chemo session lasted 10 hours, what a marathon.  It's not necessary to go into details but it seems that every reaction you could get, she got. We took each day as it came and looked for positives, however small, during that day, its amazing how much energy you use trying to be upbeat, but certainly worth it.

We were relived when it was over and she was being allowed a month's rest before radiotherapy.  Unfortunately it didn't work out like that, but journeys never do do they? with twists and turns and mountains to climb.  Before Easter DD was whisked back in to hospital where her condition rapidly deteriorated resulting with her being in ICU for 12 days with 8 of those in a coma and a prognosis of less than 50/50.  They threw every drug they could at her as they diagnosed pneumonitus caused by the cocktail of chemo drugs she had received on day 60 of her treatment.  Scary times, having spent a month in hospital with us doing 24/7 shifts, she was released to recouperate before radiotherapy.  Here they expect the family to do all the auxillary nursing, but at least DD had her own ensuite room with day beds for family overnight stays.

Now for the good bit!! She has just finished 4 weeks of daily trips for radiotherapy with all its own implications and complications, but at the end of the treatment she rang the large bell that is in the department which is to signify been there, done that, and now I'm on my way.

On her way she certainly is - the scans revealed the tumour has disappeared and she has officially been declared in remission. Yeah!!!!  Now we all begin the long road ahead of healing and returning to full strength as there are a few problems that the tumour has caused to other organs, but hopefully without too many diviations or road bumps.

So! having no effort or imagination these last months and apart from doing one or two little items, I am hoping to be able to slowly return to crafting, having been reading and following others blogs (which kept my mind otherwise engaged for a while)


So as they say - Onwards and upwards  -  Watch this space