I hope everyone enjoyed the Easter break
We had 4 days of deluge, pouring rain, they have listed it as a Gota fria,
The areas around the coast were particularly hit with many being evacuated from their homes and especially those visiting and camping. Cars were moved from underground parks, but still many have just been swamped, the local services have been working so hard to try to pump the water away. The´dry´river beds have been pulsating with the influx of so much rain, however, give it a couple of days and they will be back to their usual status. Someone reported 500L in 2 days.
Feel so sorry for those who decided to come over for the holidays for a bit of ´sun´ only to find a very different story, whilst those in the UK were enjoying such lovely weather.

Sunday we braved the weather and visited friends just a little further up the mountain, for a lovely lunch, mind you it was so bad you couldn´t see the mountains, we even had reduced visability in the courtyard and certainly couldn´t see passed the immediate garden. They are powered by solar panels desperately trying to conserve what power they had, so it was just candle light, luckily they have calor gas for cooking and a log fire, so we were all toasty. You would have thought with all the water the weeds would just pop out, huh, no such luck they are still fighting back

Yesterday was my birthday, I was actually born on an Easter Monday in a heatwave, as we were on a red alert, it was a stay at home day. I had some lovely pressies and cards and we had a roast dinner with a nice bottle of rosado, very pleasant.

Chris gave me, amongst other things, a very sweet metal garden figure 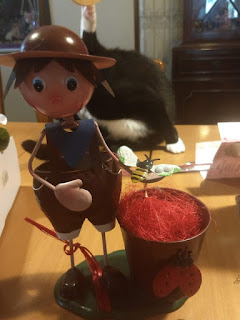 Looks like on of the Flowerpot men
(please excuse Benji in the background, practicing his yoga moves!)

I have been sprucing up some of my other pieces, perhaps that´s what prompted his thinking 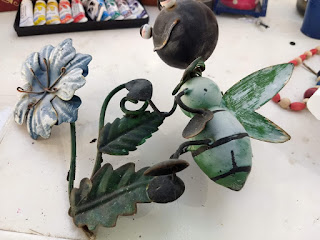 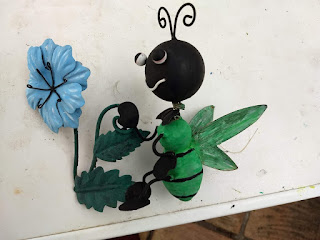 The lizard was really sorry for itself 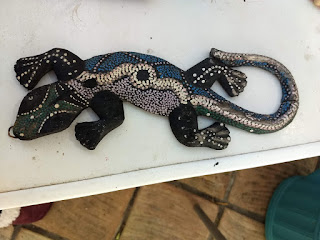 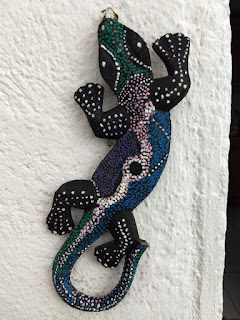 Chris presented me with a beautiful bouquet of flowers on Saturday, as he said no point in hiding them till Monday 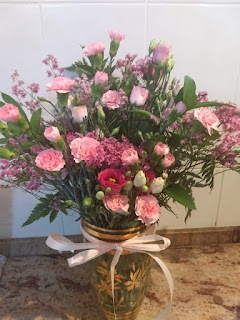 the only problem is Felix is interested in the ribbon and Amber loves to dip her paw into the vase for the water, you wouldn´t think they have fresh water available, so the inevitable happens........ 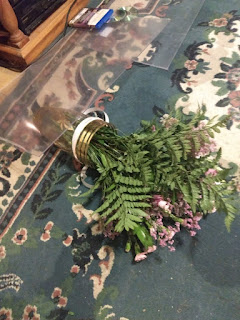 Our friends have recently rescued a Mastin puppy, coming from Granada, they split their time between here and the UK and have quite a large van, being very useful bringing goodies back and forth, also it´s large enough to accommodate Zoe.
Here she is, curled up as best she could in our courtyard, would you believe she is still only 10 months old, rather like a Shetland pony 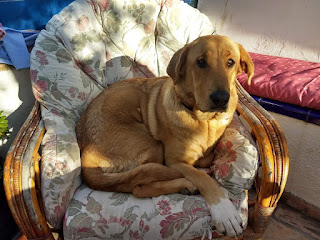 judging by her huge paws, I think there is still some growing to do!

I enjoy history, delving back and unraveling moments gone by. I always loved it at school, useless at geography mind, one word I remember most was meandering, which is what I think my mind did during lessons. the teacher didn´t help, a very tall, thin chap with a huge booming voice, used to terrify me.
Anyway, with MIL´s 90th birthday approaching I have been researching the history of her birth town, Reading, as we plan to make a newpaper for that year.
It was known as the 3 ´b´s, biscuits, beer and bulbs, although a fourth one can be added, bricks.
Biscuits were of course Huntley & Palmers, the brewery, Simmonds and bulbs were Sutton seeds, the fourth was Collier´s bricks.
Chris´s grandmother worked for Huntley´s and it´s been fun sifting through all the various sites finding out all about the company.
I´m sure we can all remember grandmothers buying broken biscuits from the grocers, mine used to say ít´s got to be broken to be eaten´
The company started in 1822 with 16 workers, which had increased in 50 years to 5000. Wages were quite low, especially for women and a pound of broken biscuits were given each week with the pay packet. Although, as with most occupations for women, once they married that was it, out of a job. It wasn´t until the mid-twentieth century that they changed their policy.  It seems the average working week was 54 hours, with a 40 minute break for breakfast and an hour for lunch, the rest of the time you were at your job.
Another Huntley relative supplied the biscuit tins and to begin with they were supplied with paper wrappers until they mastered the art of printing on the metal. Large tins to hold 10lb of biscuits were manufacturered for the grocers to have on their shelves, where they would weigh out your requirement before popping it into brown paper bags.
Decorative tins and novelties were made for special occasions, some of which are really quite sort after today, saving the biscuit tin for another use was quite natural, something I do today. 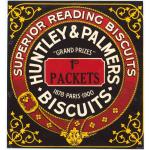 They became the world´s largest biscuit manufacturer by 1900, opening and winning awards in Paris and supplying the biscuits for Scott´s trip to the South Pole.
The town was known as ´the biscuit town´even the local football team were known as the ´biscuitmen.
The factory even had their own fire brigade and although rules were strict there were some perks, like a wedding cake if you married, and your funeral paid for if you were in service. They even introduced a Christmas gift, ranging from half a crown to one pound.
Around the mid 1920´s they released their first attempt at advertising with sound by producing a gramophone record with the song Reading biscuit town. Then in the 1930´s they advertised on the pirate radio stations Luxembourg and Normandie
Biscuit production in Reading stopped in 1976 when it was moved to Liverpool.
So there we are a little something to ponder when you are dunking your favourite biscuit.

Been at it again this week, after more rain it was opportune to get out and tug up the weeds in the slightly moistened soil. Being usually dry of course all the weeds (and plants) tend to be very deep rooted so even the smallest of weeds seem to have roots that are about 9 inches long, just a game of tug of war.
This week I tackled another area that had raced away, couch grass and horrible plants that produce burrs amongst them, I had bought a new pair of gardening gloves, Ok I admit they were only a euro from the chinese bazaar, but the tops of the fingers were soon in shreds. 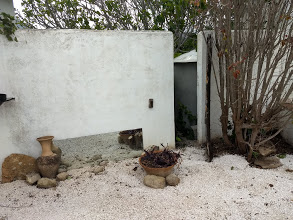 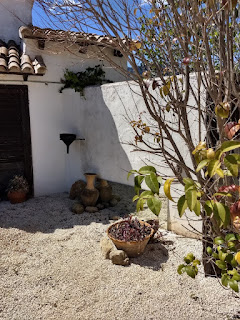 much better
Even the roses are beginning to bloom now 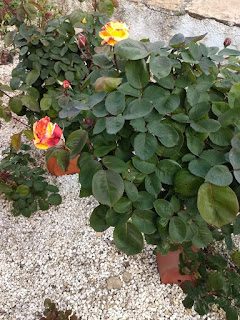 and the nasturtiums, loves the vibrant flowers and they are great added with their leaves to salads 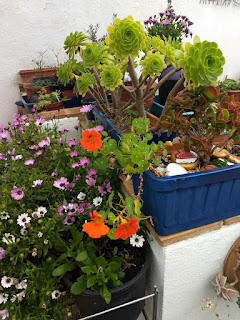 I came across this little lantern, looking rather sorry for itself 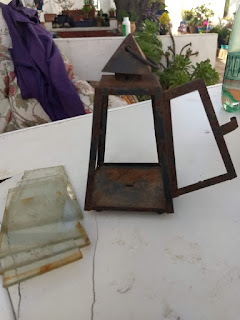 it certainly needed a revamp, I wrapped the night light with a band of coloured paper to blend in with the colour theme in the courtyard 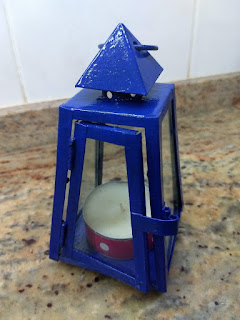 This afternoon, after 4 days of gardening I made myself admit defeat and listen to my body, enough now and sat with my knitting. I have left the lacy front to the point of decreases and carried on with the back and sleeves, they are just straight stocking stitch which gave me the opportunity to knit without the complicated pattern. Now though I am back to doing the right lacy front, so will carry on up to the decreases then I will really have to think! 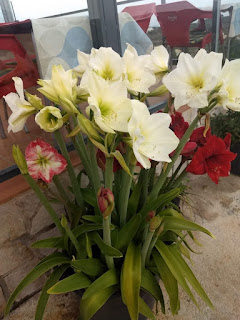