In the past I have tried knitting socks without success
I am not a very experienced knitter but manage to plod away on simple items
So I invested in some nice dpn´s 2.5mm, but put it on hold for a bit

Having seen all the wonderful socks  being knitted of late I thought I´d try again.

This time I thought I would start with some baby socks, thinking smaller, easier....
Huh!!!
.
I thought I remembered a baby sock pattern that Jo had previously made
http://jo-throughthekeyhole.blogspot.com/2018/11/a-new-arrival.html
(Thanks Jo)
and followed it through to Ravelry 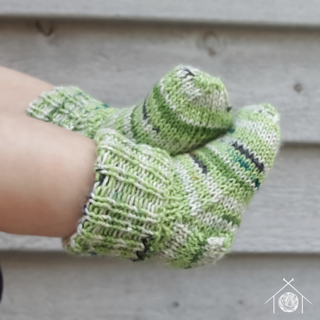 Grabbed the pattern and started progressing
Ok, fiddly things but managed to do the ribbing for 3"

Put in a life line, just in case and proceeded with the heal flap
so far so good, another life line then on to turning the heel 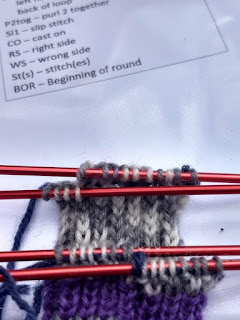 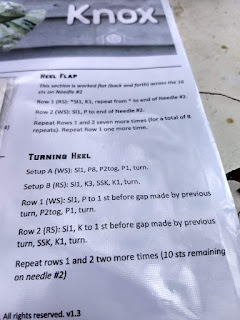 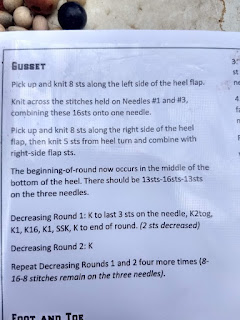 Oh dear!
Before I gave up, I thought I would throw it out there to all you lovely Ladies
Especially those who knit such gorgeous socks
Any ideas would be greatly appreciated.

Cats are renowned for showing us their love by bringing us presents.
With 10 furries we do get our fair share at times.

When I was hosting the needlework retreats at the farm we only had the one cat, but she never lost the opportunity to be part of the picture.
One lunch time as we were all around the table chatting away,  she strolled in with a live baby rabbit, holding it by the scruff. After strutting around for awhile she then let it go.
We had to stop everything to round it up and return it to the fields whilst she just sat preening herself with a satisfied grin on her face.
When ever MIL visited she would always present her with a mouse, MIL hates mice at the best of times and would be on the lookout for one of her ´pressies´
Occasionally she would bring a bird but funny enough she would never touch the hens or chicks or even the ducklings, she always gave them a wide berth, head and tail up in the air showing no interest.

Of course here there is a wide range for them to try to play with or catch as we live in the campo, including crickets, mice, voles, tree rats, lizards etc.
Monster surpassed himself the other evening, luckily I had already gone to bed, when he trotted into the lounge, proud as punch,  with this dangling from his mouth 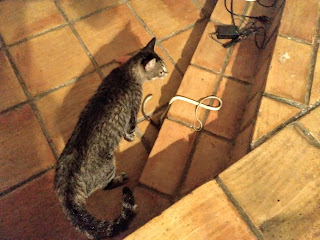 It was about two and a half feet long, a bit skinny, but never the less, still a snake.
Not sure if it was poisonious, but he had killed it luckily
Thank goodness Chris was still up, couldn´t bear to think what would have happened if he had brought his present to the bedroom.

A few years ago Amber had brought a very live and angry one in to the craft room, but she soon decided that her new playmate was not very happy when it kept rearing and spitting at her. So she dropped it, turned tail and headed outside, leaving us with the task of trying to locate its where abouts amongst all the drawers and craft materials.
We did find it, but had to clear the room to do so, we put it in a large plastic box to dispose of it.
I do not like snakes, never have, so whilst I would be able to deal with most other things I would certainly have turned tail and ran.

Thank you for your gift Monster, but next time don´t bother.......

Chris has continued to revamp some of the old family photos, painstakingly repairing and researching colours of buildings etc.
This is his latest one 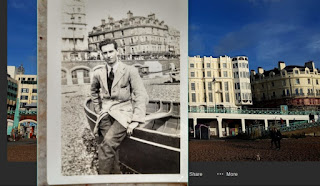 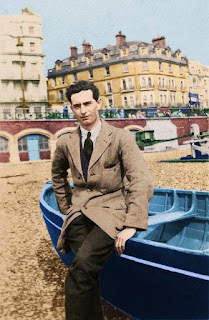 Certainly brings it to life

Better be off as I have something new on the needles that I am trying......
take care
xcx
Posted by Chrissie at 1:05 PM 12 comments:

We were invited to join our friends at Maria´s for a meal last Friday as it was Leslie´s birthday
We spent a lovely evening dining and chatting, especially as the evening cooled to a reasonable temperature.
I also received 65e as a result of some of my jewelry items being sold.
Nothing like selling something to give you the incentive of making some more.
Maria is quite happy to display my board without any commission as she says it gives an added interest to the place.

I try to keep the prices reasonable, as I would rather sell the pieces, covering basic costs of materials with a little for time. You never seem to recoup all the time costs involved when hand making items, but every little helps and there is no point in having loads of beads sitting in a drawer when they could make a few pennies. 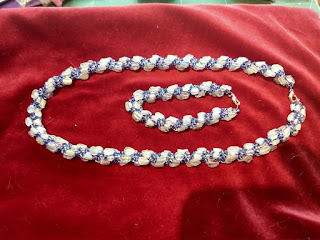 I also made a collection of  spiral bracelets but in smaller sizes, more for childrens or smaller wrists. 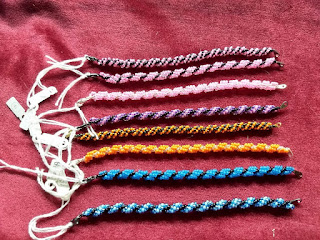 Although they are made with the same basic pattern, I love the way they all look so different with the various bead combinations.
I have to think outside the box on some of the colours as they are not really ones I would wear

It certainly whiled away the hours as its been too hot to be outside (up to 39C)
Just need to put them on the display board and hope they sell.

Peace after the fiesta

Peace and tranquility has returned to the plaza
I enjoy sitting first thing of a morning in the courtyard, a cup of tea in hand with just the insects buzzing and the birds twittering, a gentle breeze wafting the heady scent of the Jasmine around and a reasonably cool 26C before it hots up (currently 33)

A week before, the council come around and strim all the edges to the road, paint the stage, then the bins and the charanguito (pop up bar) get delivered and next years festeros stock it up
The festeros arrive early Friday evening and decorate the plaza and set tables etc up

,Friday evening we had a reasonable band providing music after the ´meal´ although they didn´t start until after 11pm and finished around 2.30am.
Snacks such as monkey nuts, plates of pickled veg with olives, gherkins, onions etc are laid out with water melon slices followed with the traditional cake and Muscatel wine, with everyone tucking into their picnics.

The beer and wine is also free, although no one takes advantage, the charanguito sell spirits, soft drinks and coffee and the proceeds go towards next years fiesta. 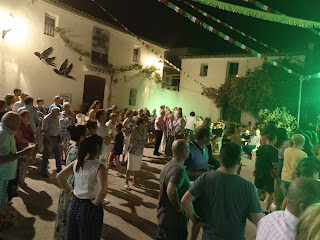 After the meal, the tables are cleared and the dancing begins 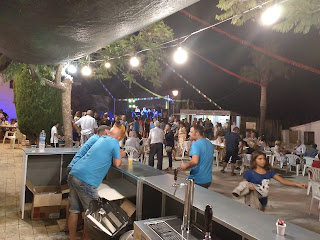 This is the beer station 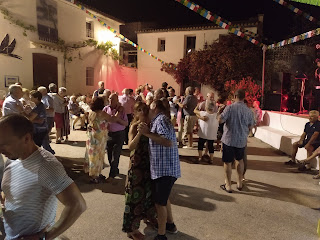 Saturday follows a similar vein, although the band wasn´t quite so good and they were still packing away at 3.45am

Sunday morning is the church service followed by next years festeros being given huge slabs of cake with a red carnation in it. Iced lemon drinks are served (rather like slush puppies) then the childrens races with a prize for every child, the winner of the adults races are given a live rooster, quite what they do with them afterwards I don´t know!
There is a lull until early evening when the traditional Spanish dancers give a display

The video was taken from our courtyard balcony, birds eye view!

They do like their sequence dancing and were happy to play whilst people wanted to dance. This was about 1am

I must admit I did give up by midnight and headed home, absolutely bushed
As usual, everything had been cleared away and collected by Tuesday, with just the streamers to take down

Our friends came up from the nearby town of Jalon for a couple of the evenings and said we were lucky as their fiesta goes all week long with music not finishing till 6am, don´t know how they do it.
No wonder everything here either closes for August or are on reduced hours. Even any building work, unless it´s a public building, is forbidden

On our last trip to the UK we managed to go to the cinema to see Rocket Man which we both enjoyed so when Chris heard of the film Yesterday, he really wanted to see it.
We thought we would have to wait until it came out on DVD blueray, but we found out it was being shown for a one off performance at the Casa de Cultura in Calpe.

The venue was very comfortable and it was shown in English but with Spanish sub titles,
It was really funny as we both found ourselves reading the sub titles as well as listening.

It was a good film, although there were a couple of places in the story that were a bit weird

We were pleased to have caught it, although I think he will still get the DVD

It´s all going to kick off here in a few hours time as it is the fiesta, it seems to have come around again so fast.
3 days of partying, very late nights, the bands will not start until after the food, usually about 11pm
and some go on till 3am.
So definitely have to have some siestas to combat the sleep deprivation.

We shall be rounding up the furries soon and shutting them in, they hate it, but there are so many cars and people they could easily come to harm, especially as some of them can´t resist sneaking into buildings that are usually kept locked up.
Last weekend they were cleaning the church and I found Thomas mooching around being noisy and shooed him back home again.

Have a good weekend whatever you are doing
take care
xcx