Not alot going on really, but I did crochet this wavey cushion from oddment balls of wool, although it did take a time as the wool made my hands even hotter, probably a better idea to leave the knitting and wool crafts till the weather is cooler. 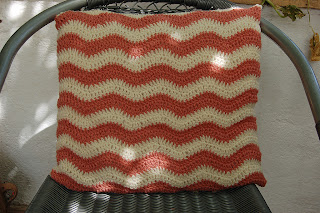 I also continued hand stitching my diamonds but they are not really photo friendly yet, but they are growing - slowly!

We had some of DD's and our friends over on Sunday for an enjoyable afternoon in the pool and a lovely meal, Donna offered to do a glitter tatoo which was fun, nothing permanent, they only last up to a week 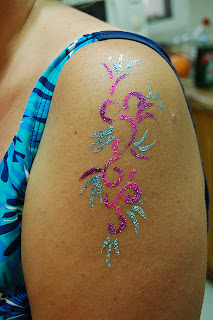 Finally got to do some stitching, made these squishy bean frogs for DD and boyfriend 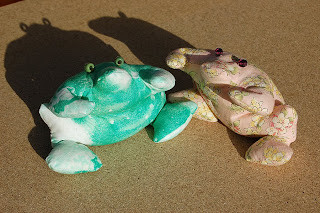 Then using the stumpwork techniques, attached organza to wires and used glitter glue to decorate them 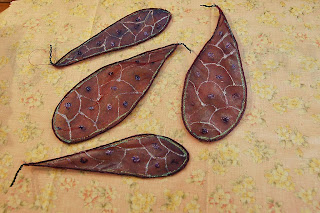 Then turned it into this, quite pleased with the result 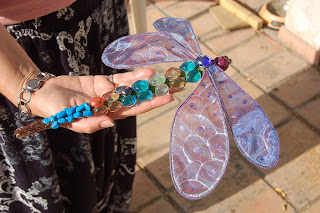 I also made some shoe stuffers filled with lavender for MIL and made her a little card to go with it, I only remembered to take a photo after I had wrapped it all up, silly me....... 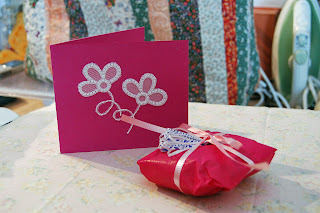 Have an enjoyable day
xcx

It's too hot to feel like doing much - but I have cut out some more diamonds and sat for a while stitching them.
When I dived into the treasure box a couple of weeks ago it spurred me this week to trace family history, so joining an ancestry site it has been interesting and at times frustrating tracing rellies. I have gone back to 1500 on one line and on others have come to an abrupt halt. It just show how important it is for those little family stories to be told and remembered because they are the wealth of information to help with the tree.
One such fact was recorded by my mum that she had held a secret as she had been asked to do for 40 years, although she felt that as most of the people involved were no longer here she could share it.

During one of my searches I was guided to anothers tree with similar information, quite what made me want to send that person a message I don't know, but I did. Lo and behold the very 'secret' had been shared only last week which resulted in two sisters who didn't know of each other being reunited after 47 years. What an emotional reunion, so many stories to share and so much to catch up on, I am hoping to catch up with both of them soon. One is in the UK and the other is in Australia but I'm sure one way or another they will be organising a meeting.

Moral of the story if there is one! trust your intuitions, listen to your inner self and just go for it.

What a week that was.....it seems incredible that the fiesta was a week ago, this photo is of the saturday night when families all bring their picnics again and special treats are dished out. This year it was cocas which are plate sized dough bases with different toppings, onions or tomato and anchovy, olives, typical spanish fare along with sandia (watermelon) and a sweet rich almond cake served with a sweet wine. As you can see the plaza was packed, then again everything was whisked away and about midnight everyone was dancing to the band. 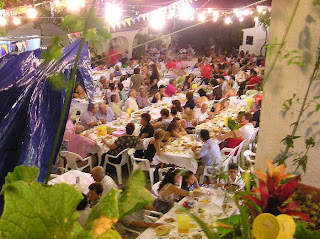 Sunday morning the church bell rings summoning everyone to the service. Funny how it is usually the ladies that go into the church whilst the men linger in the plaza in the shade talking. Half way through the service the doors open and Santa Barbara is paraded around the plaza with everyone following behind then back into the church. After the service its time for the races, the men run for the prize of a live cockrel but the children this year received surf boards and bags of sweets for the runners up. To make it fair it is divided into age groups and at the very end two tiny tots about2 all dressed in sunday best and obviously twins held hands and ran their own race, really sweet. 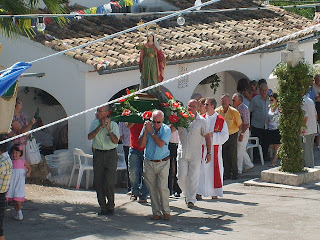 They serve more of the sweet cake and a milk made from almonds or an iced lemon drink which was really nice especially as it was about 35c. We had more visitors to see the miniatures then everyone left for their siesta. Again it seems a tradition that some of the men return late afternoon to play cards, the winner receiving a prize at the evenings event. Sunday is earlier and the band finished playing by 1am so we were at last able to get some sleep.

We needed to recover from the late nights of the weekend and didn't start the decorating till tuesday. DH had managed to get some paint that was for people who are sensitive to the odours of normal paint, it really didn't smell or give off horrible vapours but oh it was hard work it was like trying to paint with treacle and took much longer than anticipated.
We have rehomed the miniatures but the craft room is still in the throws of returning to 'normal' as is the rest of the downstairs in the heat it is little by little but it will happen.......

So no stitching or minis, hopefully next week. Last night DD and A invited us to join them at a 60s and 70s night that their friends were organising, we didn't leave until 9.30 and we arrived to the party in full swing returning home really late. It was a fun evening, good to revisit all the old favourites and have a dance, but boy are we shattered this morning, the knees and hips are not what they used to be!?
Hope you are enjoying your weekend
xcx

Bleary eyed and ears still ringing into bed at 3 am - our little plaza came alive last night, the band set up, tables and chairs out ready for the meal, slowly friends and familar faces began to arrive. This is our fifth fiesta, the first after only moving in two weeks previous and being thrown in the deep end, but now we can see the families as they are growing and meet with our rather far flung neighbours for a game of catchup. 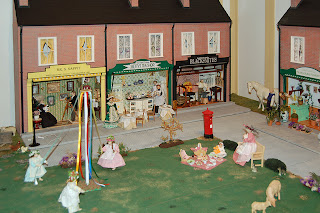 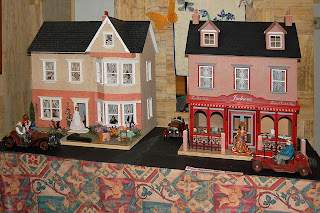 Friday evening everyone takes their picnic which turns it into an almost communial meal then the tables are whisked away ready for the dancing. We have set up the victorian street in our front room, along with our other houses and projects so we could invite neighbours and friends in to see. We invited Maria from the restaurant we use quite frequently and then suddenly a whole stream of ladies arrived, the good old tom toms must have been going, then they melted back to the party, ah so that's what the mad english ones do! lol but they were very complimentry.

A busy day today then it all kicks off again tonight - puts me in mind of Gloria Gayner (I will survive!)

catch you soon
xcx
Posted by Chrissie at 9:55 AM 2 comments:

Following on from yesterday, Fiona asked if I journaled, well sort of! what I mean is I start of with all good intentions then somehow seem to either forget or not have the time, then I go back to it. Silly really because its impossible to remember everything and like Mum's interesting looking back, but is it for pouring out of the heart or a record of life today? Maybe a bit of both. Does any one else keep a journal?

Its all go here in the ermita/plaza - this weekend sees the fiesta come round again. Can it really be a year ago already?! There are men strimming all the roadways, others have been white washing the school house (now disused) church and basically anything else they could find that was white. Today saw the arrival of the refreshment hut, then the chairs etc will arrive, then festaras will decorate the plaza with buntings set the tables, clean the church ready for Friday evening. Have to store up some sleep, we certainly won't be getting much over the weekend as they party until the wee hours.

I decided to make a picnic to put on the common of the victorian street. The little case, basket and green bowls are all from card and DH had already made all the food, just need to put ribbons on the hats 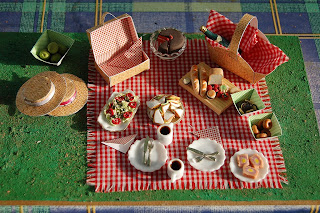 Enjoy your day
xcx
Posted by Chrissie at 12:10 PM 1 comment:

I last posted about my lovely wooden box - I hadn't really been through all the little treasures since I have had it, after losing Mum it was a bit too raw, but it felt right to do so now. Amazing little pieces of information in one of the diaries 1947 when Mum would have been 15, she obviously enjoyed going to the pictures, going at least once a week and writes of films such as Blue Skies Bing Crosby and Fred Astarie, The Green years, Cary Grant, Great Expectations John Mills and Valerie Hobson, Hungry Hill Margaret Lockwood and Dennis Price, First of the few, David Niven and Leslie Howard and Margie, Jeanne Crain........ there are many more and I have had a bit of fun googling them to find out more -

In April 1947 she says they heard from Australia House with the papers to enable them to emigrate - although when the time came my uncle wouldn't transfer to the Australian navy and grandparents wouldn't go without him, how life could have been different!? In one entry she was very excited because she had been given a pay rise and was now earning 1 pounds 15 shillings a week........

Years ago I asked my grandma to write down some of her 'stories' she used to tell I never found out if she had done so until going through Mum's things and found them - these are really facinating as grandma recalls the Titanic sinking and bombing in the First world war, collecting a jug of milk from the milk cart on its rounds, the trams in London and much more. An insight to a bygone age from a personal perspective that you don't get in history books. I'm sure many many people have these memories to look back on and wonder what future generations will think of 'our time'.

It's lovely to hear quilters making their own labels to date their work and keeping records of heirloom projects - my family sampler dates from 1831 when the stitcher was 8 years old, but unfortunately there are no other details, such a shame. 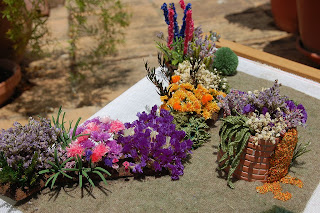 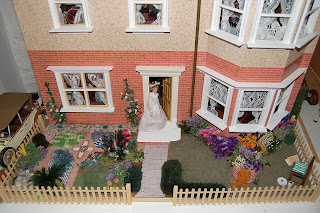 The delphiniums are made of tissue circles using the office hole punch, very effective, a mix of fibre flowers and dried ones give interest and texture. 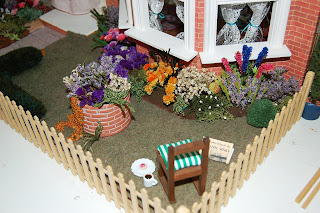 The original house on the left and the still under construction, Edwardian shop and cafe 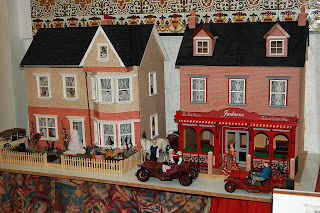 The spanish street is coming on too - DH flits from one to the other depending on heat of the day, materials and umph, and we thought we had UFO's lol
Enjoy your day
xcx
Posted by Chrissie at 10:01 AM 2 comments: